zer0w1re released his first VM, Knock Knock, so I downloaded it and had a go (truth be told, I tested it before the public release, but this writeup is for the version available on Vulnhub.) 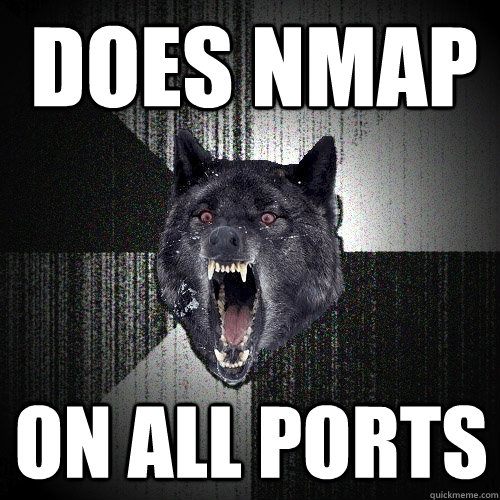 Connecting to port 1337 results in 3 numbers.

I guess I’m knocking some ports then. NB: in the test version, these 3 ports were in order, in the release version they’re randomised. So rather than knocking them in the order returned, we’re going to have to write a python script to do all possible port orders. The fun thing here is we don’t need to check anything after each knock attempt - we just knock the port numbers in all possible combinations and then check afterwards for any new ports.

I couldn’t be bothered to write my own script, so I stole Leonjza’s, as I was talking to him about it at the time

He’s a clever one :P

Now another NMAP is required to see what opened (if anything)

The HTTP server is hosting a simple page, which displays an image of a door, and text asking us to look deeper.

Now, if that’s not an invitation to look inside the JPG, then I don’t know what is.

Ooh, some possible credentials. They look like ROT13, so…

OK, that’s just Jason reversed, so I guess the same deal for the password.

These credentials can be used to SSH into the VM, which allows us to take a quick look around.

Looks like we’re in a restricted bash shell, so lets escape that quickly

OK, so the next part is probably explained a lot better by reading some IRC logs.

So, now that you read that, this is what my Python script looks like

This generates a .tfc file, which when provided to the tfc application “decrypts”, jumps to esp and executes the shellcode, dropping us to a shell.